n an effort to reduce weight and improve fuel efficiency, modern automobiles use more polymers than ever.  Polymer performance is critically dependent on its microstructure.  One of the primary uses of Atomic Force Microscopy, particularly phase imaging is characterizing that microstructure.

Height and phase image of a thermoplastic
copolymer.The dark regions in the phase
image (right panel) represent a different
monomer from the brighter regions. The
monomer represented by the darker regions
is also somewhat depressed in the height
image (left panel) (as shown by the somewhat
darker color in the height image.

Automobiles and other road vehicles face extremely harsh environments; extremes of heat and cold, road salt and other chemicals, extended exposure to the ultraviolet in sunlight. Such an environment is prone to corrosion. Understanding corrosion, and its progress, is a key to making materials that withstand corrosion better. Atomic Force Microscopy gives the engineer a peek into the beginnings of corrosion and its progress to better understand its causes and mechanisms. 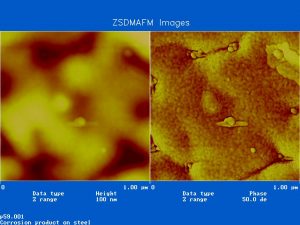 Height and phase image of carbon steel after a
brief exposure to dry steam. In the height
image (left panel) the bright areas are high
and the dark areas are low. The corrosion
starts as small plaques forming in hollows
within the material (bright regions in the
phase image).

Moving parts in contact wear.  They wear to break in and, finally, they wear out.  Better understanding the wear processes, and the changes that occur during wear, helps make better parts that last longer.  By making a three dimensional map of the surface, Atomic Force Microscopy provides an unparalleled look at the changes that happen from wear.

Our Rk analysis provides an in-depth look at the surface structure of materials and how they change with wear.

Failure analysis of moving and other parts

Parts slip when they shouldn’t, or don’t slip when they should.  Either failure can turn tens of thousands of dollars of automobile into a traffic hazard or a lawn ornament.  Understanding the failure is the first step to preventing it.  Atomic Force Microscopy, by providing a three-dimensional map of of the surface along with material contrasts that can help in identifying contaminants and other sources of failure.

Electrical techniques such as Surface Potential Imaging (Scanning Kelvin Imaging) can reveal secrets of metal surface crystallography to help better understand the interaction of one part with another.

Any place where two parts touch, the importance of surface character looms large.  Atomic Force Microscopy provides an in-depth look at that surface character to help insure that the thousands of parts in the automobiles, trucks, and other vehicles of today function properly.

These are just a few of the ways in which Atomic Force Microscopy can help resolve problems.